During the golden week vacation, I had my first great opportunity to visit Australia. I accompanied Nick on his homecoming to celebrate his parents’ 50th wedding anniversary. Not having been out of Japan for almost 15 years gave me itchy feet for Australia, the country I had long dreamed of visiting, so I was just thrilled to grab this wonderful opportunity. The experience I had there never failed to meet my expectations and will be treasured for many years to come. We had many wonderful, memorable experiences during our stay, but the highlight was our short trip down south. We rented a car and drove a total distance of 1,300 km going south to Walpole, west to Margaret River and north back to Perth. Miles and miles of magnificent scenery of forests and green fields stretched as far as the eye could see, with the occasional bank of dark clouds moving slowly over the horizon threatening heavy thundershowers. In the midst of deep forests, far away from the hectic routine of daily life, I felt the dynamic energy of nature invigorating my spirit, Valley of the Giants, Walpole

making me part of its sublime beauty. No wonder Nick’s father boasts of this untouched beauty in the southern part of Western Australia. We visited ‘Valley of the Giants’ in Walpole-Nornalup National Park, one of the most popular tourist destinations in the area. ‘Valley of the Giants’ refers to the forests of large red tingle trees, and has a 420 meter long suspension bridge set 40 meters above ground at its highest level, offering the excitement of exploring the canopy of the magnificent tingle forest. Walking high up in the tree tops was a totally different experience for me, and I enjoyed every minute of it. 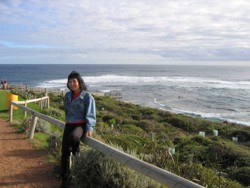 Margaret River is a very modern sophisticated looking city located near the west coast and offers many exciting sights to visit, such as numerous wineries, large limestone caves and world class surfing beaches. We visited one of the wineries and enjoyed a treat of sampling different kinds of wine. Then, we proceeded to one of the major limestone caves in the area. It was so exciting to walk down into the stunning chamber made of the formation of stalactites and stalagmites way beneath the earth. The beauty of the dim light reflecting the rock formations in the tranquil lake was mysterious enough to take my breath away. Visiting one of the fantastic beaches in the area was another great treat for me. Although it was off-season, there were quite a few surfers and people fishing in the sea. White waves repeatedly beating against the shore with the sun slowly coming out from behind a cloud was quite a picturesque sight to see. 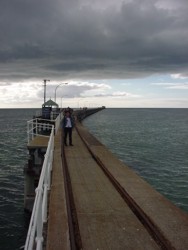 From Margaret River we drove to the Busselton Jetty, which is the longest wooden jetty in the Southern Hemisphere. This jetty stretches about 2km out to sea and we enjoyed a leisurely walk on the jetty with the company of many seagulls gliding low through the air just above our heads. The underwater observatory located at the end of the jetty took us almost 8 meters below sea level, and we could observe the beautiful colorful marine world of nature. Sitting on the bottom level of the observatory made me wish I could go out in the ocean, swim among a school of fish, and explore the marine world. With the vivid memories of beautiful southwestern Australia clearly imprinted on my mind, we headed back to Perth.

Perth, the state capital of Western Australia, is located approximately 30 minutes’ drive from Nick’s hometown. The city boomed during a gold rush in the 19th century and the population now stands at over 1.3 million. As the description “the most isolated city in the world” states, Perth is far away from any major cities; the capital city, Canberra is over 3,000 km away. But when you visit Perth, you will know it also deserves to be called, “the most beautiful city in Australia” and it’s definitely worth visiting. The landscape of the city is carefully planned to bring about the beauty of both historical and modern buildings. The city looks very urban, full of energy boosted by the thriving economy, but at the same time conveys a laid-back, somewhat Mediterranean atmosphere. Every corner I turned looked like a picture, and I couldn’t get enough of admiring the beautiful architecture. Without any reservation, Perth is by far the most beautiful city I have ever visited. 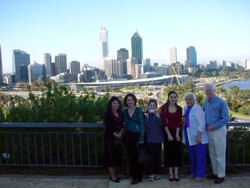 I was also very much impressed by young people’s polite attitudes on public transportation. On the bus we took to Perth, I saw a few high school students offer their seats to some elderly people. Nick informed me that children are expected to offer their seats to the elderly on a bus and that if the rule is not followed, the driver may stop the bus and tell the youngsters to give up their seats. This kind of civility should be observed more often in Japan. I also got an impression that Australian people lead very productive lives: elderly people pursuing their hobbies or contributing to society and young people trying to hone their skills by involving themselves in many activities.

Although the ten days of our trip was hardly enough even to scratch the surface of things, I enjoyed sharing a wonderful time with Nick’s family, experiencing Australian culture firsthand, as well as immersing myself in the magnificent nature of Western Australia. I came back to Japan with slightly broadened perspectives towards the world, and of course with the anticipation of my next visit to Australia.